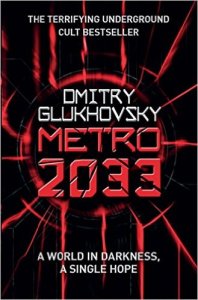 While browsing the shelves at Kinokuniya, I was surprised to see a translated Russian science fiction novel from the last decade. Having been interested in reading more of translated Russian science fiction, I bought the novel and started to read it a few months later. Only two people asked what I was reading: “Is that the same book as the game?” Only then did I do a search online and see that the entire book had previously been serialized (which would explain its blocky feel) in Russian online, had a cult following, and became a game. It has a good sci-fi/horror/post-apocalyptic plot to it, ideal for a game.

Synopsis: It has been a decade or two since the war that made life on the surface impossible. The few thousand who have survived live in the Moscow Metro (elsewhere, there must be survivors in similar situations) yet there’s also a form of life above: flying monsters, black figures, and mutants. Young Artyom has only known life in the station of VDNHk, but events lead him to be assigned to an important task: navigate the sometimes deadly tunnels and stations in order to deliver a message. Through his navigation, he experiences the many facets of life underground, the many facets of subjective truth, and secrets about the Metro, its people, and himself.

This novel revisits an a few old SF favorite: humanity living underground because of a nuclear holocaust. Rather than caves or fallout shelters, Metro 2033 takes the plot underground in the city of Moscow into its labyrinth of subways systems. Its once architectural beauty has become a sinisterly dark maze; where there were commuters traversing the city, now there are rats swarming the inhabited stations. But the rats aren’t the only murderous pests: on the surface, death takes to the air but also seeks opportunity in the inhabited tunnels…

…and here is where the urbane trope rears its head: there are, of course, mutants after the nuclear war, mutants that live in the radiation that would otherwise kill a human yet they flourish openly in the concrete scaffolding of the derelict city. There’s a catch on this theme toward the end of the novel that lends it some favor toward the sequels: the rather dully named Metro 2034 (2009/2014) and Metro 2035 (2015/TBA).

Prior to the world’s destruction, the metro itself was simply a series of stations where trains stopped and the tunnels that were mere transitions between the hubs of commuters. Now, an in extremist view, the metro is a microcosm of everything that was wrong with modern Russia: dark foreigners begin to infiltrate the community, religious zealots threaten the general stability of some sections, fascists look for trouble with everyone, and even the saner central core of the Polis teeters on mystic dreams. Sanity cannot even be found in silence—an omen of death—nor in isolation—another omen of decay. Stay alone and death will come via murderous rats or suicide, yet still with others risk being murdered, executed, trampled, or used as cannon fodder.

Regardless of your choice of death, the period of your life leading up to that isn’t exactly filled with luxury. Most stations are lit the meager illumination of emergency lights and the food is borderline unspeakable: old military rations, mushrooms, and rat for the well-to-do and human flesh for the desperate. Books are hard to come by, let alone batteries or bullets. The general misery spurs thought in the young protagonist named Artyom. As he slinks through the tunnels seeing the various modes of life and madness, he ponders the meaning of it all; in addition, he speculates his own place amid everything, which is being to seem more and more like the trajectory of destiny rather than meandering of drudgery. Not only does he see the signs, but others see the signs in him.

As someone who has always loved maps, the provided map of the metro with its various markings is enticing as it’s full of detail and mysteries. Are these details and mysteries within the novel fulfilling enough to compel me to read its sequels… that I’m not sure of yet.